Augmented Reality is filled with seemingly unlimited potential and is rapidly driving us toward a technologically integrated world. With OPPO AR Glass recently unveiled, there are exciting new possibilities just around the corner waiting to be unleashed!

Read on to discover some of the beneficial and fun uses of AR that creators have already begun to tap into.

Both VR and AR have massive benefits to offer students and educators. Being able to physically see and manipulate a lifelike scientific diagram is many times more effective than conceptualizing it internally or seeing a picture of it. It is estimated that the human brain naturally retains 10% of what it reads, 20% of what it hears, and 90% of what it does or simulates. Being able to learn through tangible visualization greatly benefits students in many subject areas – including sciences, history, geography, math, visual arts, and so on. It also has enormous capacity to make learning more fun and engaging, keeping the students interested in the learning process and ultimately producing better results.

Ever wanted to get a better feel for the destination you’re considering traveling to before committing to going there? With Augmented Reality apps, it’s now possible. An AR headset like OPPO AR Glass enables the user to see and experience famous areas in tourist destinations from the comfort of their own home. After getting a feel for it from the tour, users can decide whether they want to go and experience it in person!

AR systems are in place and being developed to help guide traffic in busy areas such as malls and airports. One noteworthy success of this sort is the award-winning Gatwick airport passenger app, which uses over 2,000 beacons to help passengers navigate through the airport, ultimately benefitting traffic flow.

Gaming is a medium that is continually expanding and reaching new technological and artistic heights. The introduction of VR and AR in the game universe will unveil many more interactive and immersive options to game designers and players. Several popular franchises have already begun embracing Augmented Reality, including Harry Potter, Monopoly, Jurassic Park, and Angry Birds. As people become more receptive to AR technology’s capabilities, we can expect many mobile apps will be designed upon an AR foundation in the years to come.

Augmented Reality’s incorporation in the gaming universe has immense potential to redefine gaming altogether. Imagine being able to feel as though you are fully immersed in a game, reaching new heights of human experience. After all, a major part of what makes gaming appealing is its fantastical nature and ability to transport you to an alternate universe. This may seem like a distant future akin to Black Mirror or Ready Player One, but with the rate which AR is developing, we may not be far from making alternate realities our reality.

The healthcare industry is rapidly adapting to the development of AR, with an estimated 70 million AR users in the US healthcare industry alone. Augmented Reality can be employed through cameras, sensors, and displays which then superimpose digital information in the real world and grant medical professionals useful information. AR can also aid in training surgeons and dentists by making interactive simulations more effective and accessible. It can divulge patient anatomy by reconstructing it using image-based tracking and spatial information. A handheld device named AccuVein aids doctors and physicians by illuminating a map of the peripheral veins on the surface of the patient’s skin.

Similarly to seeing inside bodies, Augmented Reality can grant construction teams the ability to see inside walls. This is extremely beneficial information to have when dealing with complex projects, which allows construction teams oversight of insulation and piping layouts, and a better understanding of the construction site. 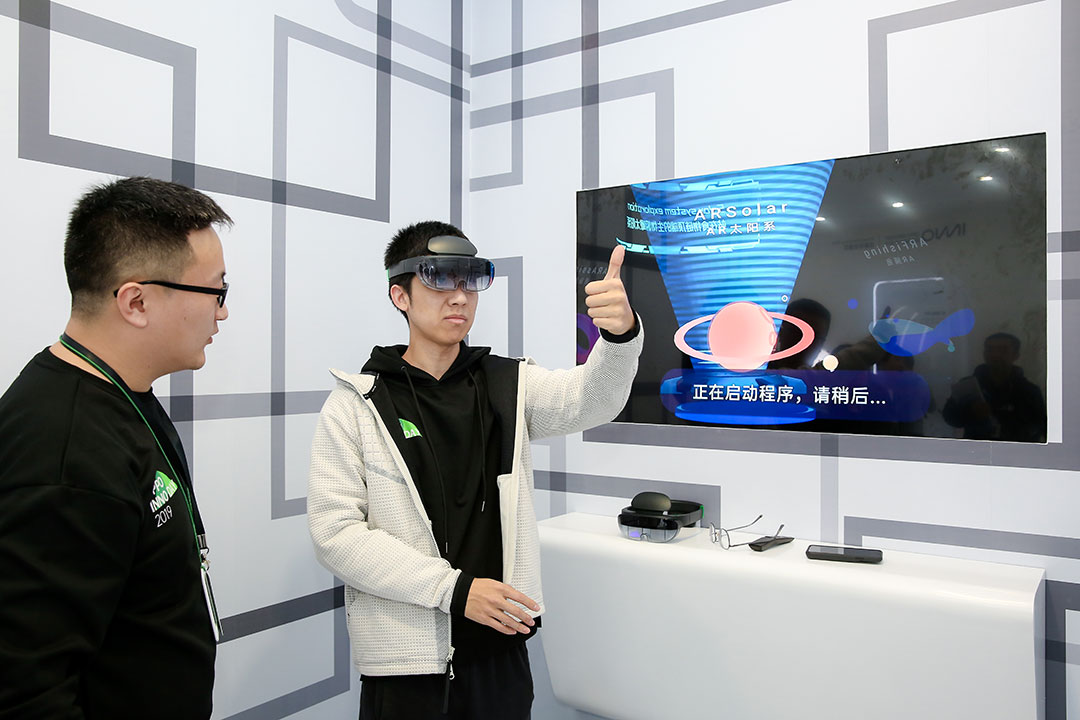 Augmented Reality assists in logistics with an efficient device known as vision picking. This vision-based system is designed to be intuitive and make manual picking fast and error-free. It can help guide the user through the warehouse, access serial numbers, and optimize the picking process.

We can expect that AR Devices such as OPPO AR Glass will continually be developed and iterated upon to make such processes extremely user friendly and efficient.