Central to our digital lives, smartphones can do just about anything these days. But due to the dependence we have on our beloved handsets, and the demand we require for power - including a higher frequency of charging and discharging - battery lifespan has become critical to smartphone performance.

Not only is battery life a concern for smartphone users, but the issue of ageing, unused and discarded lithium batteries is also an increasingly worrying topic when it comes to the future and sustainability. It is projected that over the next eight years, the global demand for lithium-ion batteries will increase elevenfold, reaching over two terawatt-hours in 2030. The demand is coming from the rise in electric vehicles and small electronic products such as mobile phones.

For users to have a more burden-free charging experience while improving the sustainable development of society at the same time, OPPO has developed a number of battery innovations for its latest flagship handset, and debut the Battery Health Engine on Find X5 Pro.

The Battery Health Engine is a system-level battery health optimizing solution that came to fruition through three years of research and innovation. It is based on OPPO’s customized battery management chip and includes two key technologies: Smart Battery Health Algorithm and Battery Healing Technology.

Smart Battery Health Algorithm tracks real-time electric potential across the negative electrodes inside the battery. It can dynamically adjust the charging currency within a reasonable range, effectively minimizing the occurrence of dead lithium while maintaining the maximum charging current. This helps ensure prolonged battery lifespan and faster charging speed.

To fully understand how this innovation works, we should first explain the charging and discharging behaviour of lithium batteries in mobile phones. 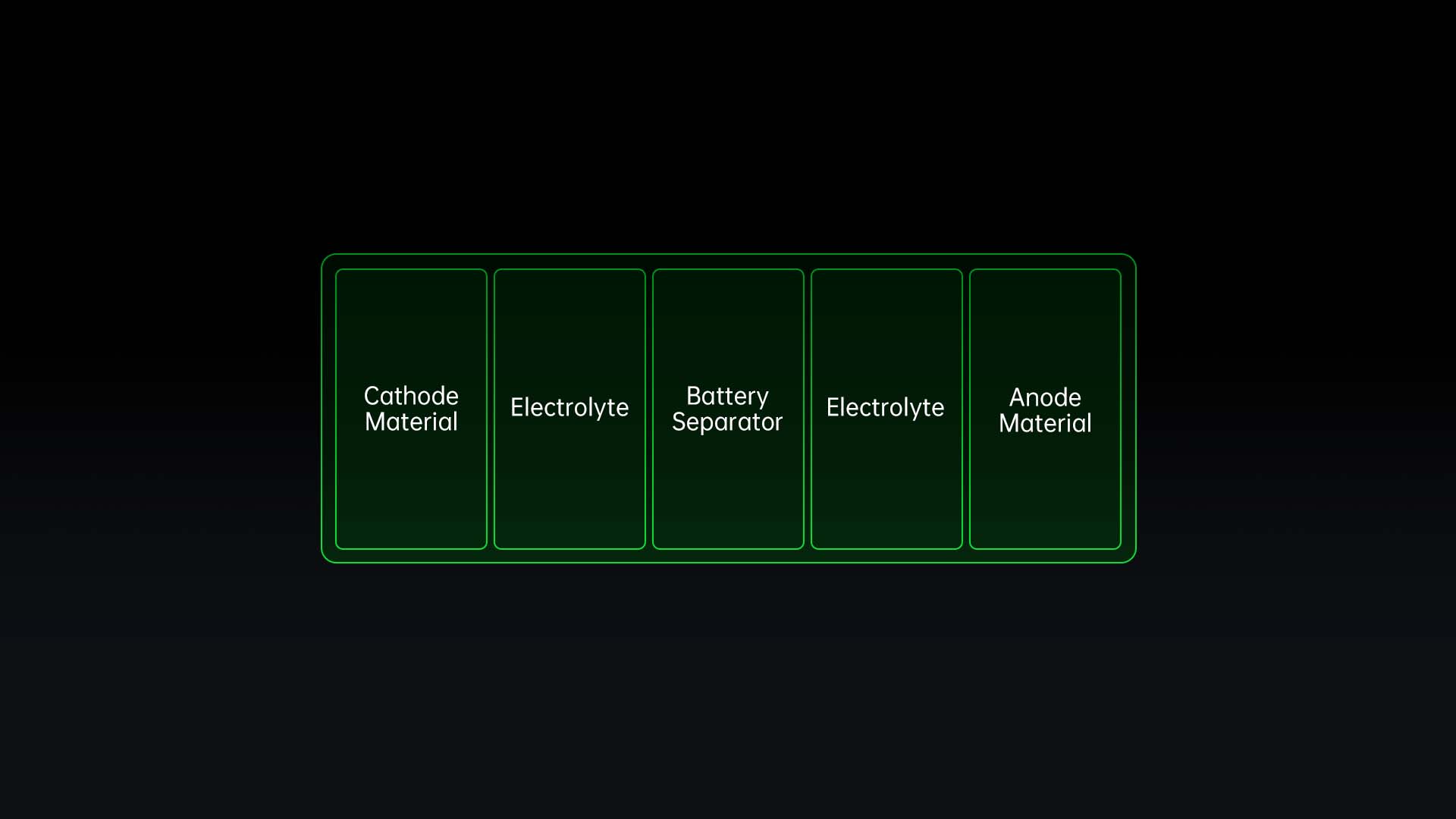 The structure of a lithium battery

The charging and discharging process can be simply viewed as the movement of lithium ions between positive and negative electrodes. 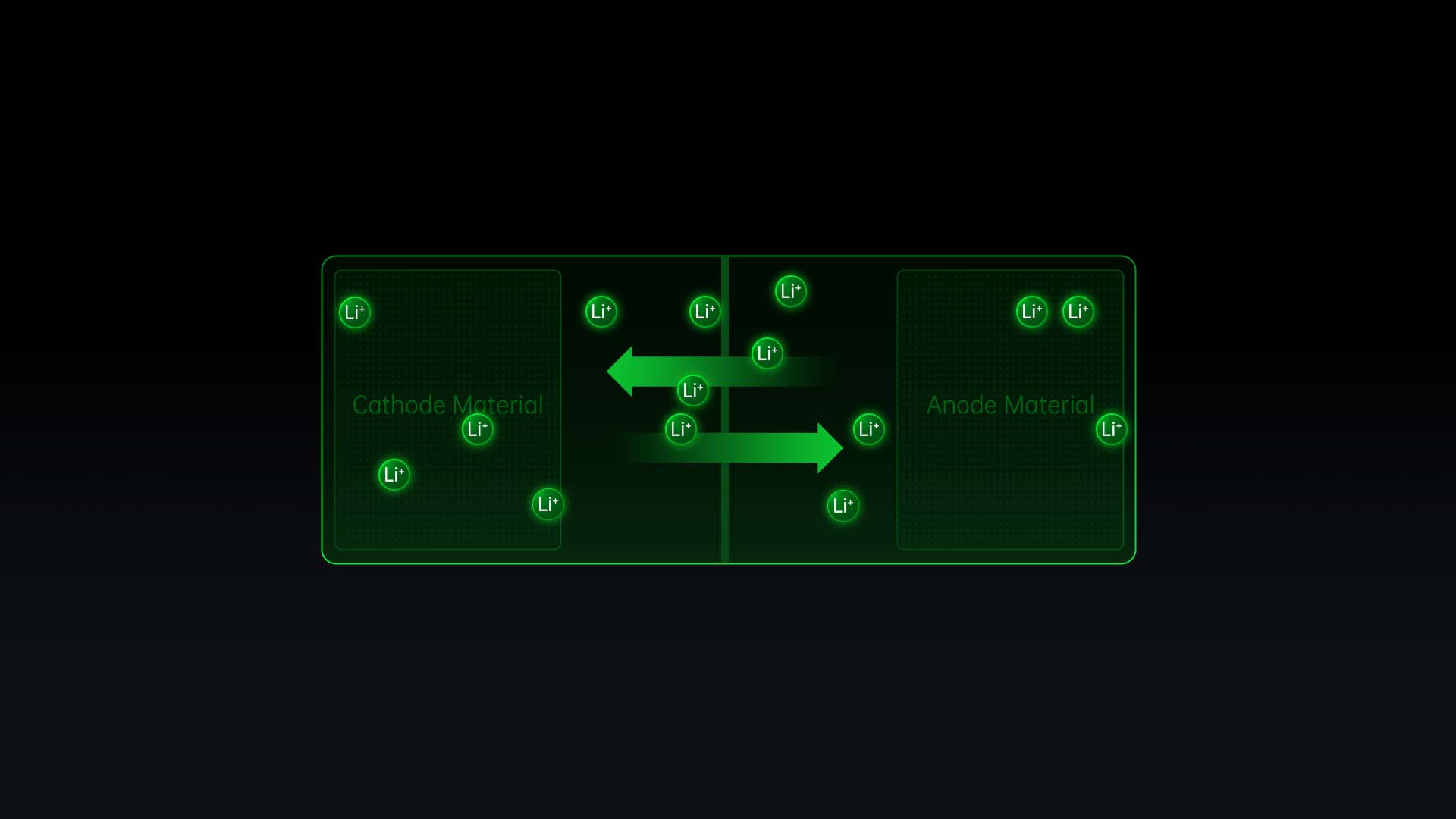 The movement of lithium ions

Once the active lithium ions can’t return to the positive electrode under the impact of the excessive current or overcharging, they will become dead lithium, and this leads to a reduction in the capacity of the battery. 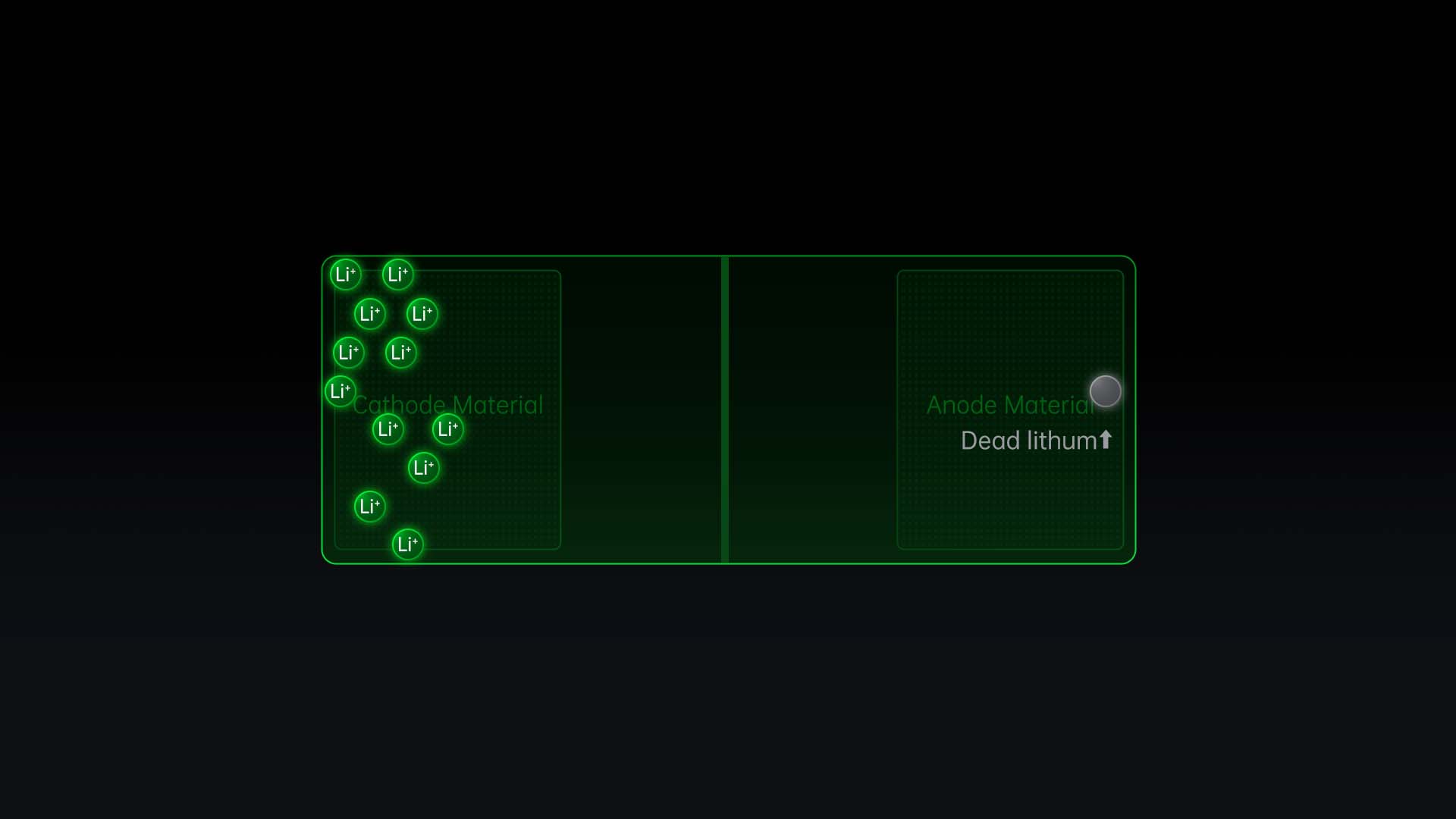 Dead lithium appears because of excessive current or overcharging 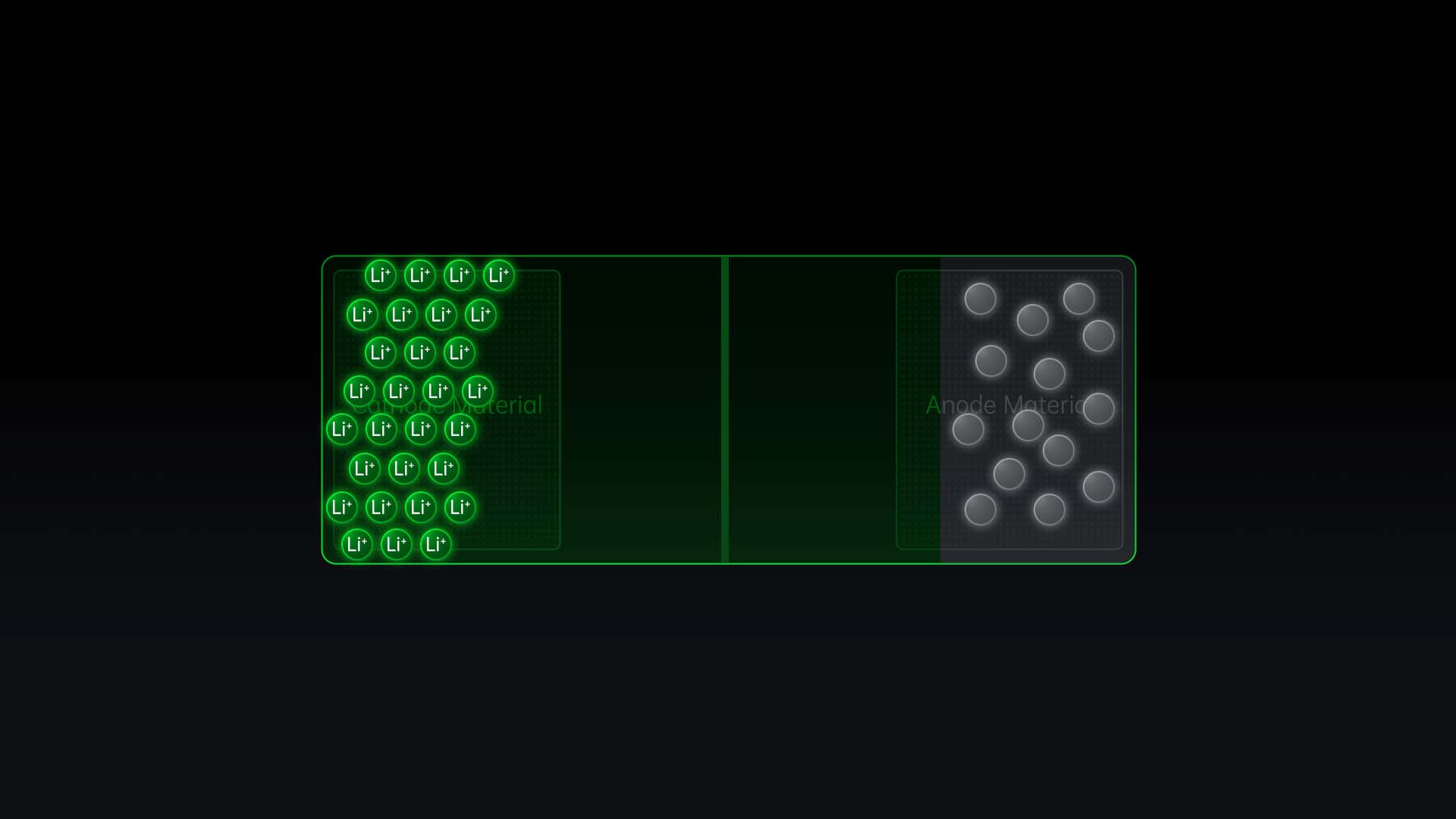 Therefore, we need to preserve as many active lithium ions as possible so that we can control the charging current. Currently only by controlling the current and voltage in real-time and within a reasonable range can we reduce the occurrence of dead lithium.

In order to obtain the negative electrode potential in real time, OPPO Institute has been exploring potential solutions in its laboratory for three years. Relying on a large amount of battery performance data, the team has been continuously correcting the accuracy of the battery model to develop the Smart Battery Health Algorithm that can track the potential of the negative electrode of the battery in real-time.

With the blessing of this technology, smartphones could be able to match a reasonable charging current for different battery capacities, charging adapters, battery states, and charging stages by accurately judging the negative electrode potential. From here, we can then maximise the maintenance of lithium-ion activity and prolong battery lifespan.

In addition to a huge breakthrough in the algorithm, OPPO has also optimised the internal chemical system of the battery in Find X5 Pro, applying a healing feature through the use of Battery Healing Technology. By improving the electrolyte formula, the electrodes are continuously repaired during the battery’s charge and discharge cycles, forming a more stable and durable film called Solid Electrolyte Interface. 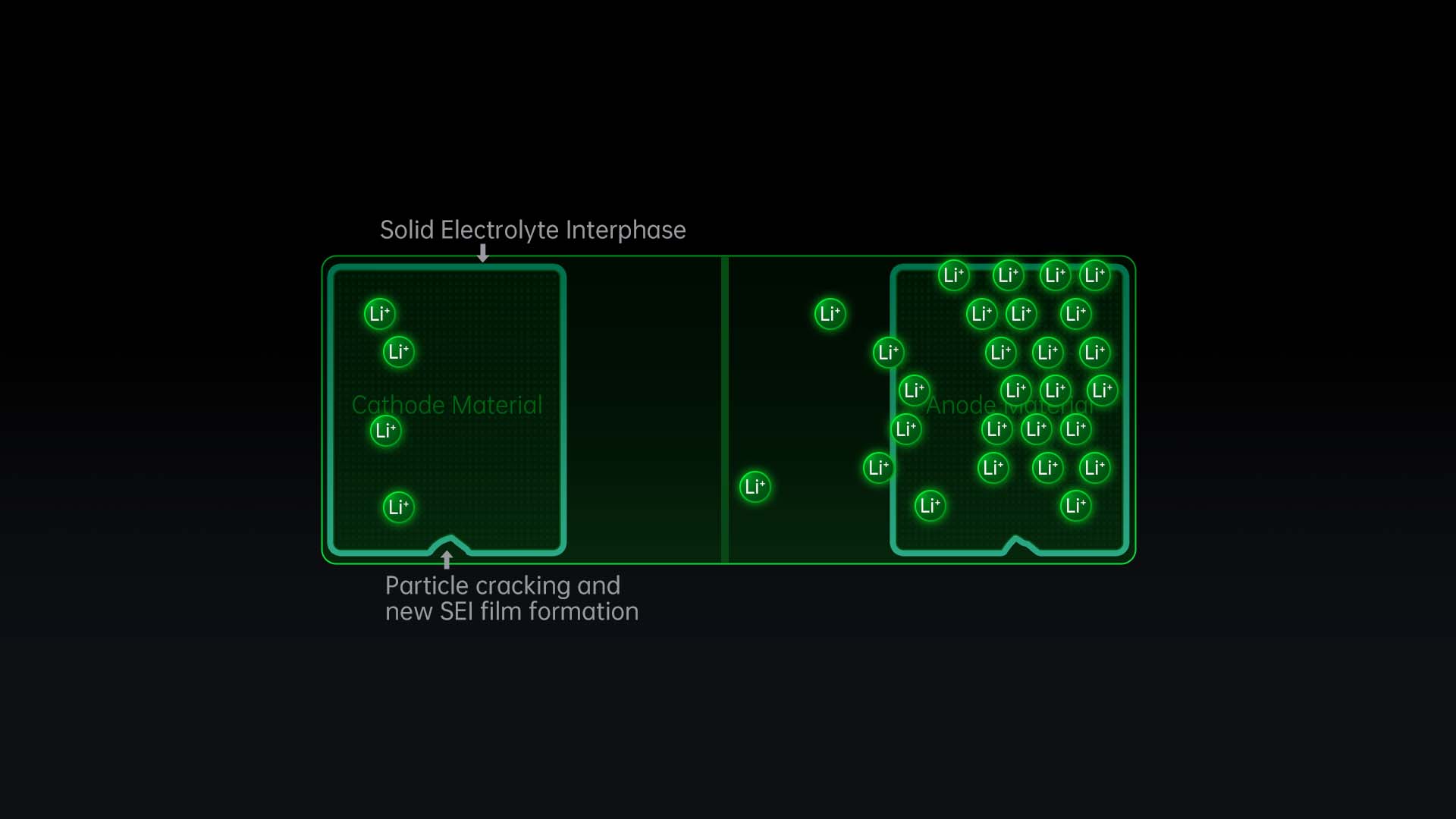 The Solid Electrolyte Interphase, also known as SEI, is formed by the reduction and reaction of a small amount of polar solvent in the electrolyte. This happens when the lithium-ion battery is charged and discharged after gaining some electrons. It is then distributed on the surface of the positive and negative materials of the lithium battery, which can prevent the damage of the solvent molecules to the electrode materials and improve the cycle performance of the electrodes. Therefore, during the shuttle process of lithium ions between the positive and negative electrodes, the electrolyte can work to repair the SEI - another key factor affecting battery lifespan.

In OPPO’s latest laboratory test results, we’ve found that the Battery Health Engine is able to keep a battery at 80% of its original capacity after as many as 1,600 charge cycles. This effectively doubled the lifespan of batteries under current industrial standards. 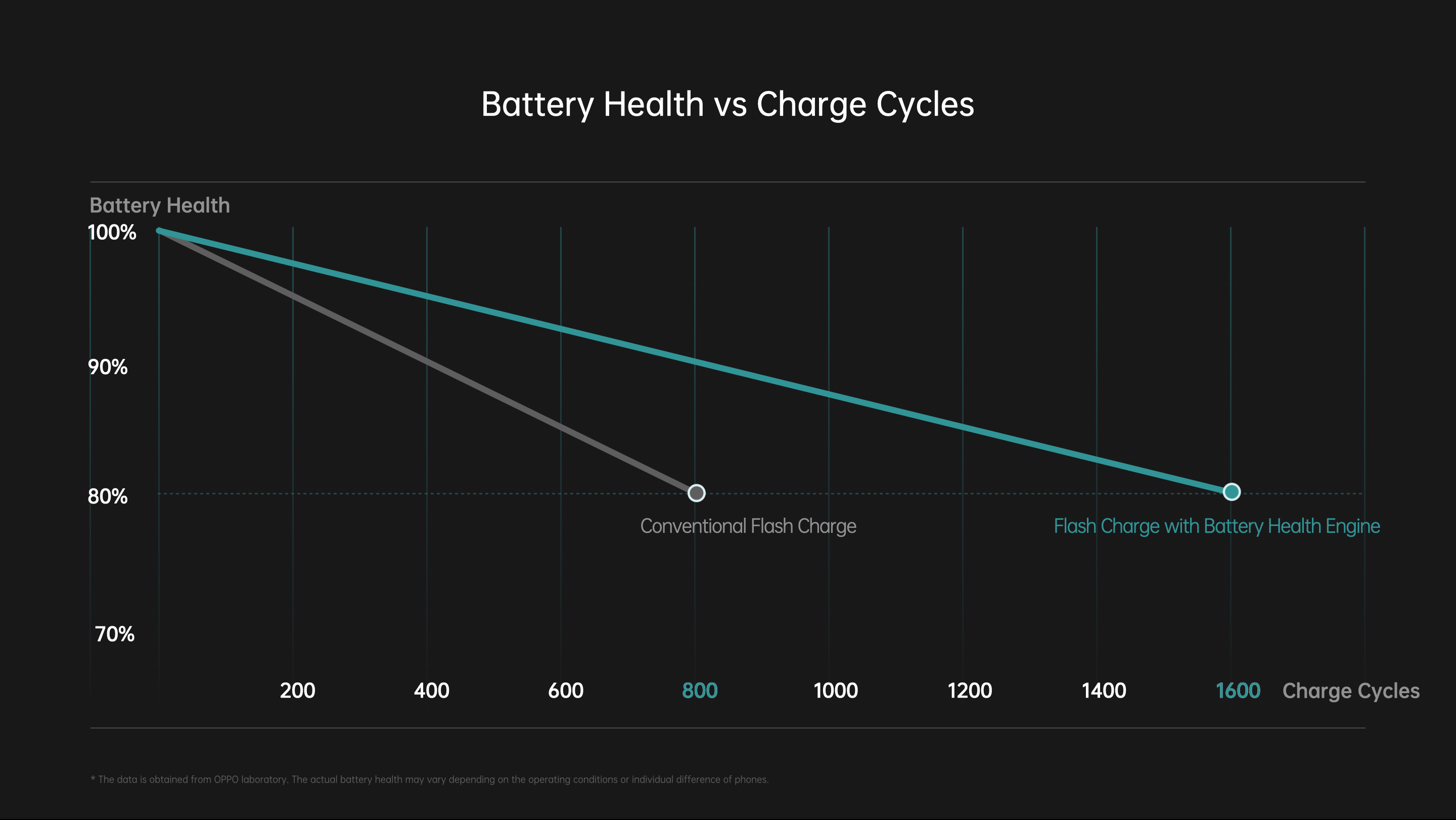 The battery lifespan of Find X5 Pro is doubled

Since the battery lifespan of the Find X5 Pro is double that of the industry standard, it can maximise the protection of the battery while improving the way people experience their handsets.

It’s OPPO’s constant focus and development in battery technology that is enabling us to transform users' charging experience and increase the power of smartphones.

As the leader of charging technology, OPPO knows that the future development of fast charging can not only stop at high power - it should also consider aspects such as safety, portability, compatibility, and battery lifespan.

Here at OPPO, we’re taking big steps towards upgrading the world of smartphone charging to completely revolutionise the user experience of smartphones while contributing to the future sustainability of lithium battery technologies.