Since the establishment of OPPO 17 years ago, OPPO have traveled to over 50 countries and regions and brought a wide range of smart devices to consumers globally. While OPPO is making solid footprints one step at a time, we would like to share some interesting stories to make you know more about us. 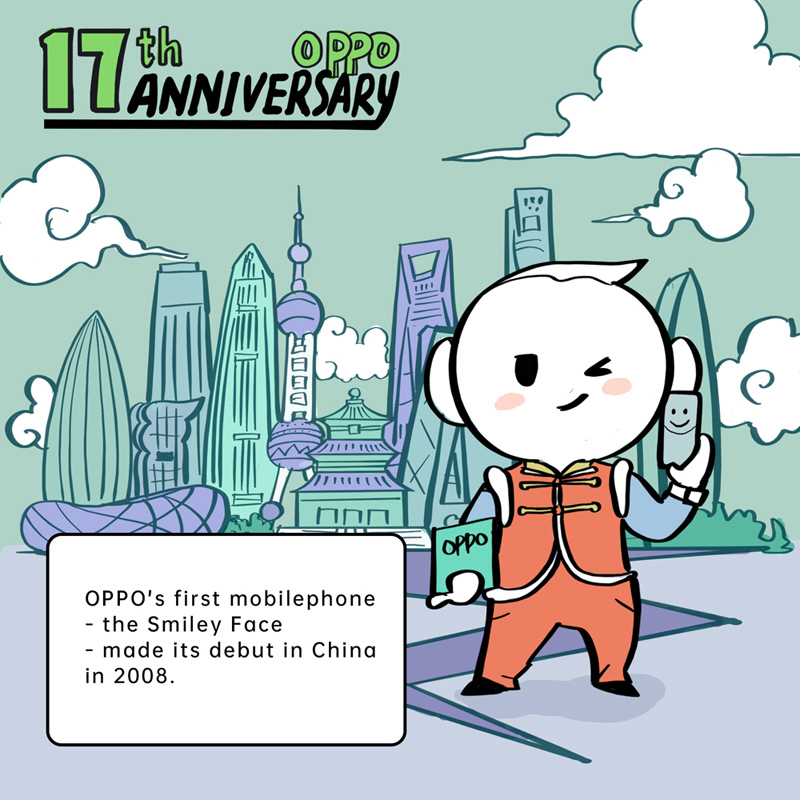 China
In 2008, the OPPO A103, a mobile phone with a unique design on its back, commonly known as the smiley face phone, debuted on the Chinese market and became a best seller with over a million units sold in a year. Its creative design has added a bit of ‘human touch’ to make users feel a sense of intimacy towards the otherwise cold and lifeless tech gadgets. Putting faith in " Technology for mankind, kindness for the world.", OPPO hopes to make every user feel the kindness and warmth of technology through every product or service they provide. 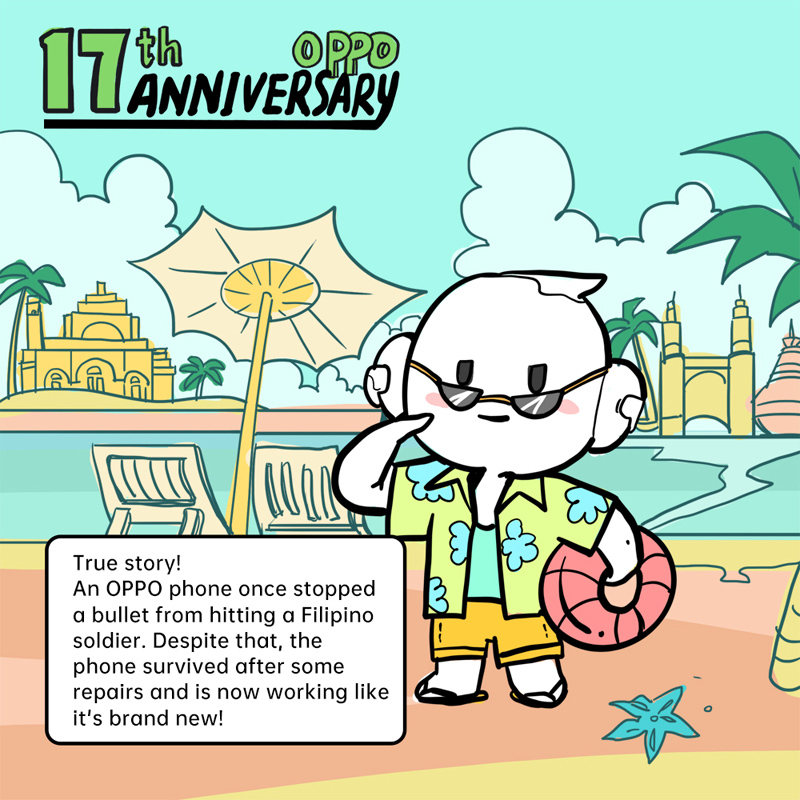 Asia and Pacific
This is a true story that happened in the Asia-Pacific region. A soldier from the Philippines was ambushed by his enemy when he was on patrol. Miraculously a bullet was stopped by the Reno4 in his pocket, so he walked out of the firefight unscathed. Despite literally taking a bullet for its owner, this Reno4 only suffered a cracked screen and a damaged battery. After being repaired, the phone is now working like it's brand new again. 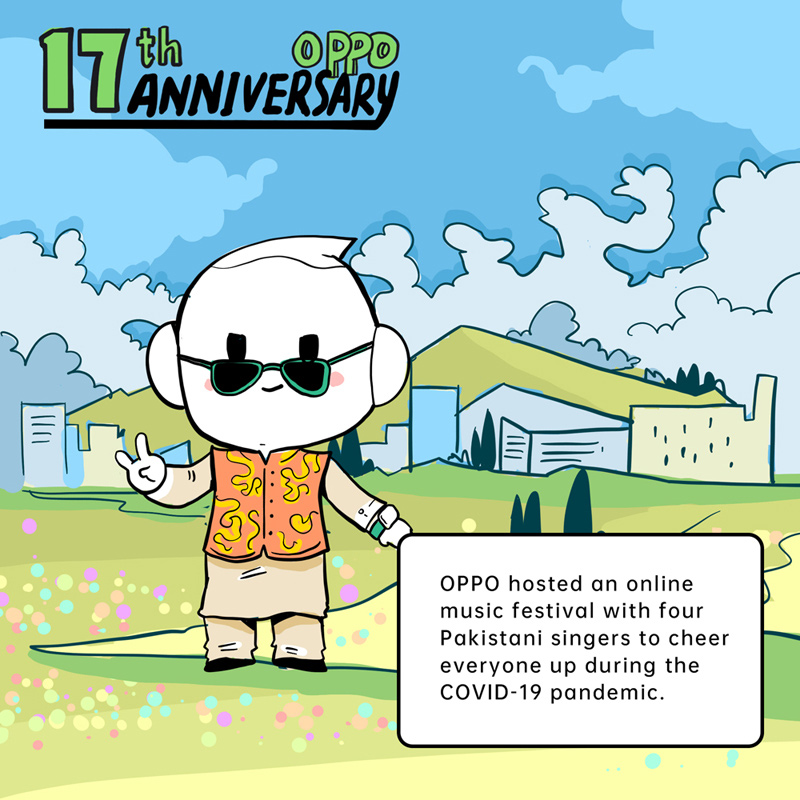 South Asia
The COVID-19 pandemic lockdowns have been difficult for everyone. To brighten up Pakistani netizens in such  difficult times, OPPO hosted an online music festival partnered with four Pakistani singers Bilal Saeed, Asim Azhar, Shamoon Ismail, and Ali Hamza. The event went on for four days to cheer everyone up and encourage people to stay indoors. OPPO wants everyone to feel the warmth that comes from the joint forces of technology and music. 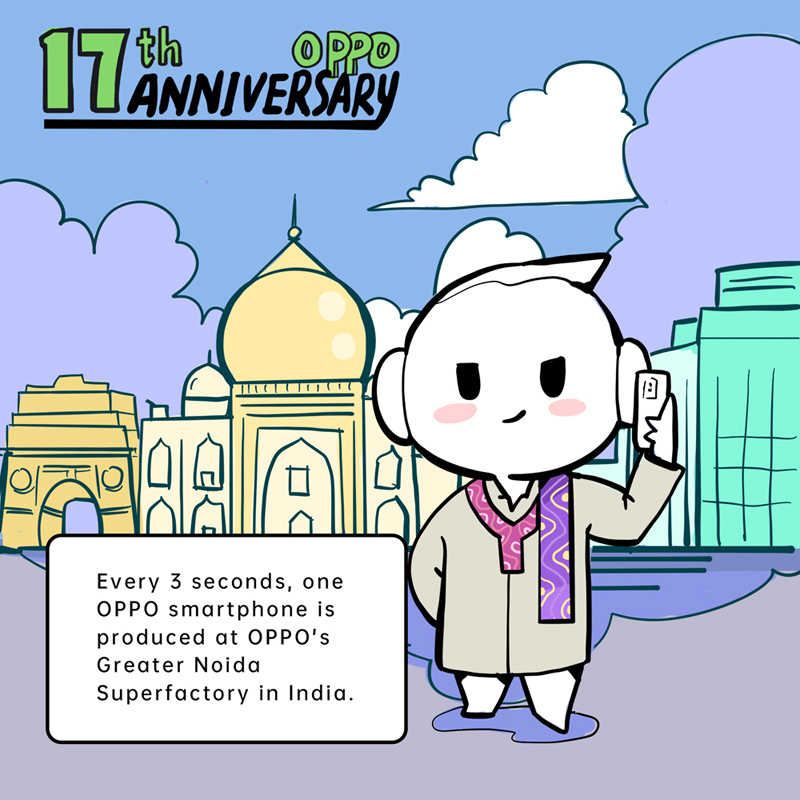 India
Every 3 seconds, one OPPO smartphone is produced at OPPO’s Greater Noida super factory in India. Here the materials go through series of manufacturing processes and over 150 quality assurance tests. The Greater Noida facility churns out millions of mobile devices every month, showing OPPO’s firm commitment to India and a successful example of “Made-in-India for the world”. 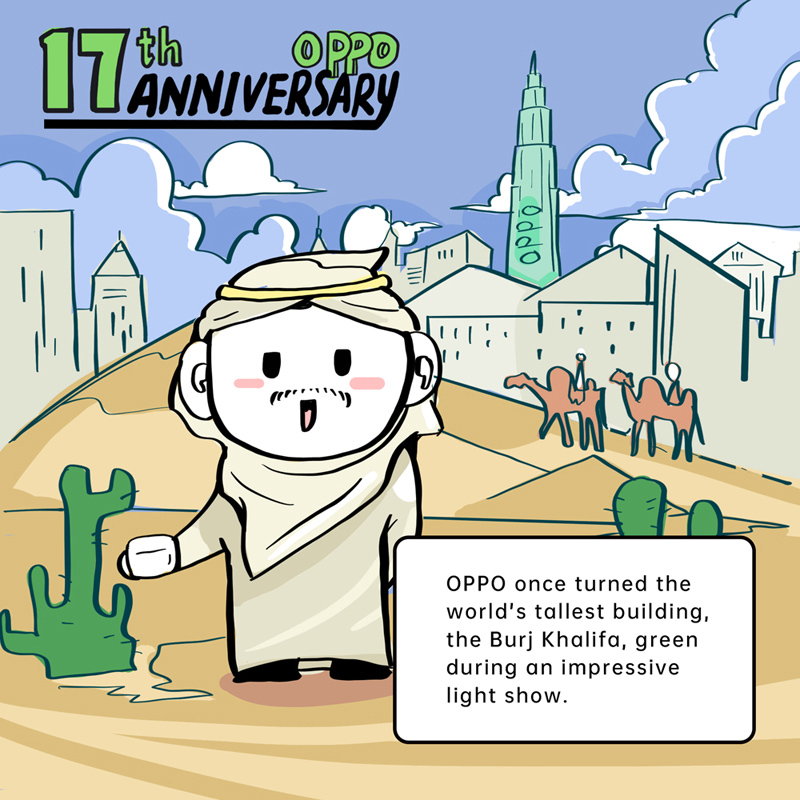 Middle East and Africa
What is it like to light up the world's tallest building? Ask OPPO! We once turned the 828m Burj Khalifa into a gorgeous green billboard by an impressive light show, celebrating the launch of the OPPO Reno2 and demonstrating its amazing imaging features. 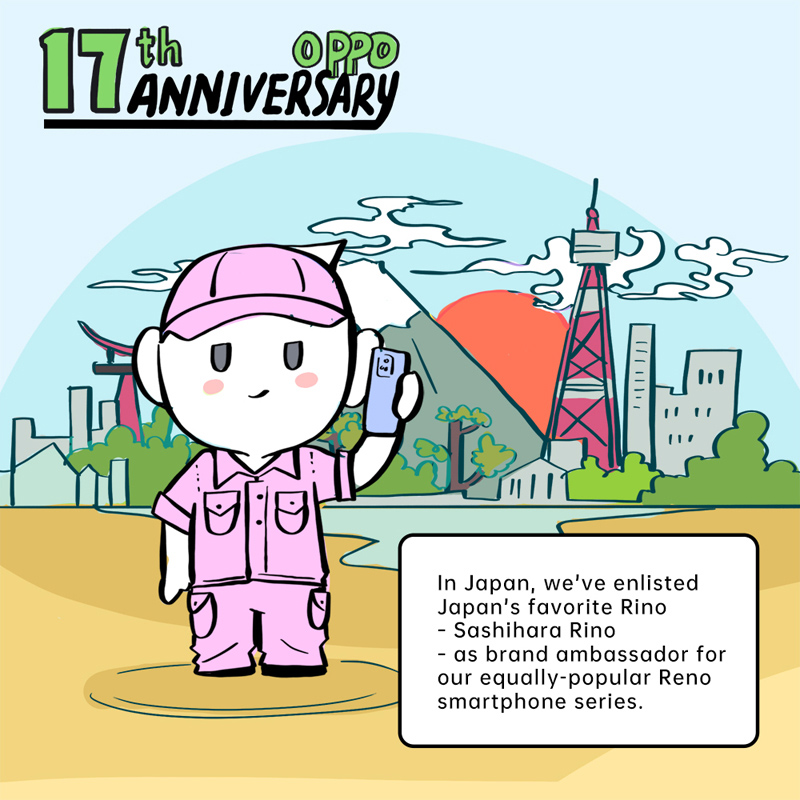 Japan
Aren't Reno and Rino similar in pronunciation? For the launch of the new OPPO Reno3 A in the Japan Market, OPPO invited a Japanese celebrity named Rino - Sashihara Rino, who shares the similar name pronunciation with Reno, to be the brand ambassadress for our Reno product. 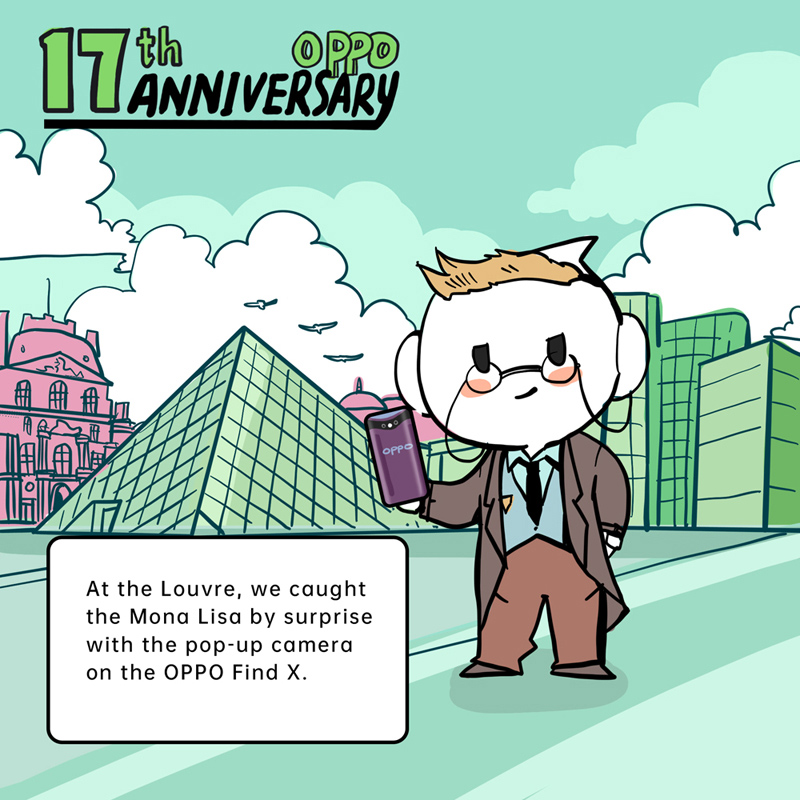 Western Europe
OPPO officially embarked on the European market with the OPPO Find X, which is a perfect fusion of technology and art. It was unveiled to the world at the glass pyramids of the Louvre in France. The iconic pop-up camera with its “dual-track” periscope structure, the thinness, and the high screen-to-body ratio amazed everyone, including Mona Lisa. 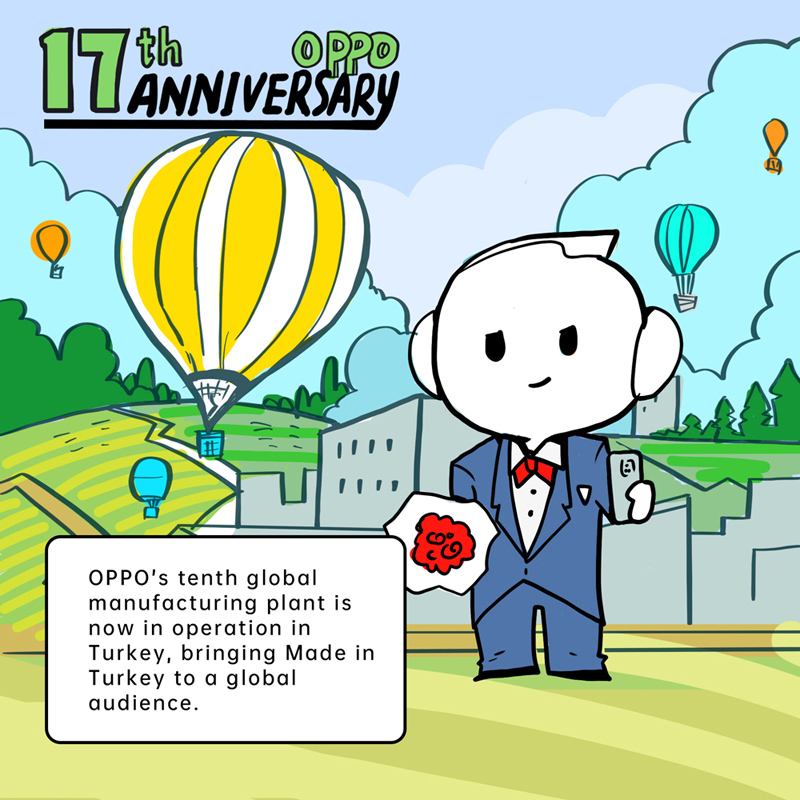 Central and Eastern Europe
The Turkish factory was the tenth stop of OPPO's global manufacturing journey. It marked an important moment in OPPO’s new chapter of its global journey. Constructed within four months, this factory was the only local factory to receive a CKD (Completely Knocked Down) certification. Plus, it had a full production line qualification and the application of highly automated Surface Mount Technology. From that day on, "Made in Turkey" mobile phones not only met the needs of local users but also were introduced to users globally. 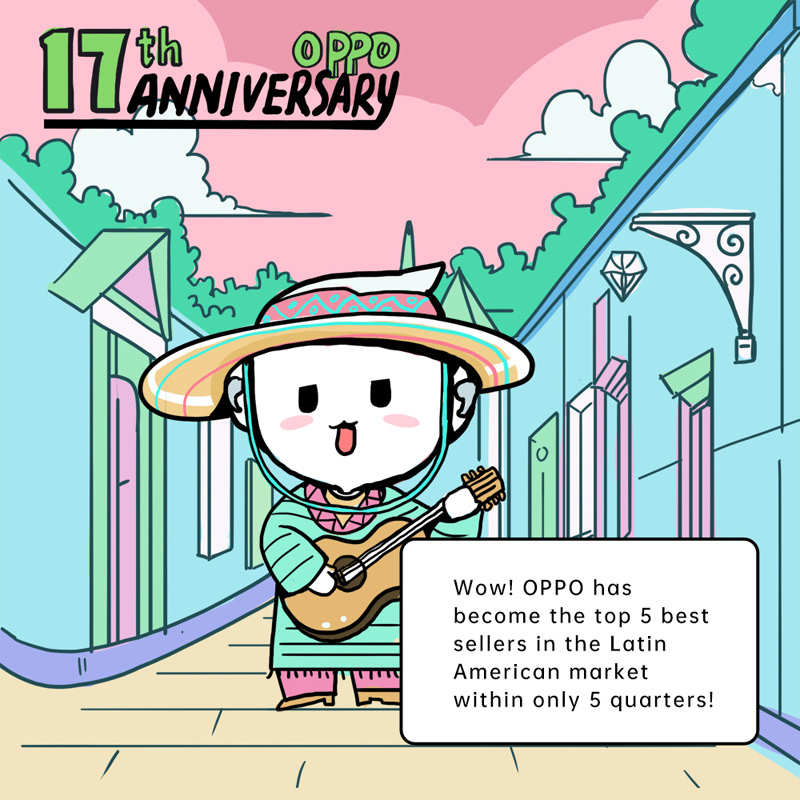 Latin America
In 2020, OPPO marked the latest stop on its global journey - Latin America. Within only five quarters, we have moved into Mexican, Chilean and Colombian markets. OPPO has also ranked among the top five in Latin America markets for the first time, as evident by our 7004% annual growth in this market!

Over the past 17 years, OPPO has left its footprint all over the world. In the future, OPPO will continue to expand its technological developments, product innovations and become more global. Bringing high-quality tech products, meticulous services, and even better experiences to more OPPO users and partners.

Next   The Stories Behind OPPO’s Latest Imaging Technologies