Congratulations to Carlos Alcaraz, who wins the OPPO Breakthrough Inspiration Award at Wimbledon 2022

12 July 2022, London, UK: As this year’s Wimbledon has drawn toa close, The All England Lawn Tennis Club and OPPO (Wimbledon’s Global Partner for the fourth consecutive year) recognise the sporting excellence on show during the fortnight.  Looking at those that inspire, not just the next generation of tennis stars, but also the fans in the stands and at home, unveiled today is the winner of the OPPO Breakthrough Inspiration Award – Carlos Alcaraz. 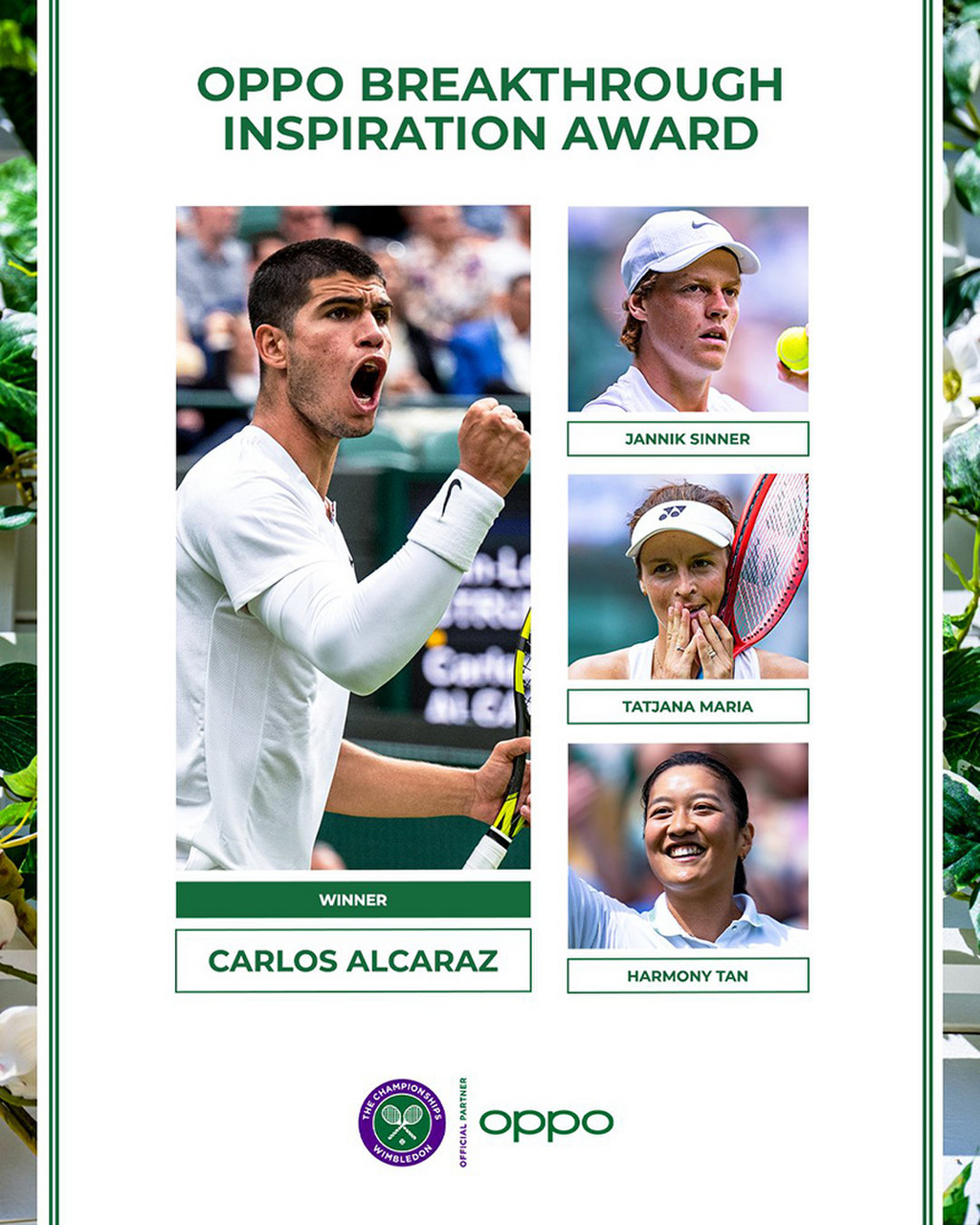 Hailed as one of the most exciting young stars in tennis, the 19-year-old has won four ATP singles titles this year and is currently ranked at a career-high of No.6 in the world.

Tied to OPPO’s new brand proposition, Inspiration Ahead, this year’s award has rebranded to focus on recognising the herculean efforts of tennis players at the peak of their talents. Competing against the best of the best comes with struggle and adversity, and the award champions those who have persevered and excelled with a positive outlook.

“Inspiration Ahead means showing confidence and poise when we are moving forward. It encourages us to remain resolved and graceful as we brave the storm and break the stagnation. Participating in sporting events is fantastic for OPPO to convey the mutually inspirational spirit and communicate OPPO’s technology innovation experience with our global users.” announced William Liu, OPPO's Vice President and President of Global Marketing.

The finalists, chosen by a panel of Wimbledon’s broadcast correspondents, were selected from this year’s competing tennis stars at The Championships. In the running to be crowned the winner of the OPPO Breakthrough Inspiration Award for 2022 were eventual winner Carlos Alcaraz, along with Jannik Sinner, Tatjana Maria and Harmony Tan. Fans around the world had the power to vote for the tennis player that inspired them the most throughout the competition, with the vote concluding on 8 July.

Breaking new ground and inspiring people worldwide is a key ethos at OPPO. The OPPO Breakthrough Inspiration Award exemplifies this ethos by acknowledging the tennis stars that live and breathe those values. Inspiring future tennis stars is key to continuing the eclectic 100-year legacy of Wimbledon’s Centre Court, marking it as one of the greatest sporting tournaments in the world.