●       DXOMARK is an independent French technology company and international leader in the unbiased quality assessment of technology
●       For its rigorous battery test, DXOMARK measures battery performance in three factors – charging, autonomy, and efficiency – through over 150 hours of testing and 70 measurements. 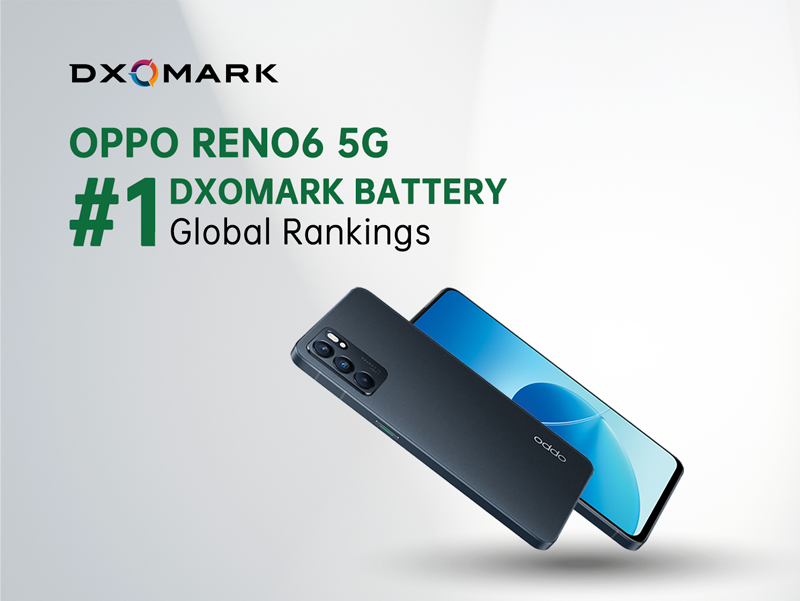 DXOMARK is an independent French technology company and the international leader in the quality assessment of smartphone cameras, display, audio and battery, and other consumer electronics, such as cameras and speakers with the aim of helping consumers to choose best-performing products. For its rigorous battery test, DXOMARK measures battery performance in three factors – charging, autonomy, and efficiency – through over 150 hours of testing and 70 measurements.

“OPPO Reno6 5G turned in a stellar battery performance, taking top marks in certain categories and coming in first globally among all devices,” cited DXOMARK in its review. “The device is very well-balanced and well-designed and provides a good comprehensive experience.”

Of the three factors tested, OPPO Reno6 5G came in first place in both charging and efficiency tests, secured the global top spot in DXOMARK’s global database for overall battery performance. Equipped with 65W SuperVOOC 2.0 fast-charge technology, Reno6 5G can be charged to an indicated 100% in 29 minutes and an actual full charge in 35 minutes, resulting in its score of 109 in the charging performance category.

DXOMARK’s test also shows that the device is able to gain over 10 hours of autonomy with just a 5-minute charge when the battery level is under 50% capacity, providing quick-boost autonomy ahead of any other smartphone. OPPO Reno6 5G has the best charge-up performance in its category, earning it a first-place score of 101 for overall efficiency across the entire Battery protocol database to date.

The DXOMARK test also indicates that the OPPO Reno6 5G is performing well in battery autonomy and that the phone would be capable of delivering 57 hours of autonomy with moderate use. OPPO Reno6 5G outshines the category average in terms of battery performance when using social apps, gaming, streaming music, and streaming video (both cellular and Wi-Fi), highlighting its strong performance under typical day-to-day usage.

The OPPO Reno series has proven to be a hit with smartphone users worldwide. Released in 2021 as the AI Portrait Expert, Reno6 5G is the latest edition in the series and offers outstanding all-round performance on top of a suite of cutting-edge portrait imaging features, the iconic Reno Glow design, and rapid 5G connectivity. Alongside Reno6 5G’s leading battery performance, OPPO’s proprietary 65W SuperVOOC 2.0 fast-charge technology provides a superior charging experience for users. Since the introduction of VOOC Flash Charge in 2014, OPPO has released over 30 devices that support the technology, bringing this fast, convenient, and safe charging technology to more than 195 million people worldwide.