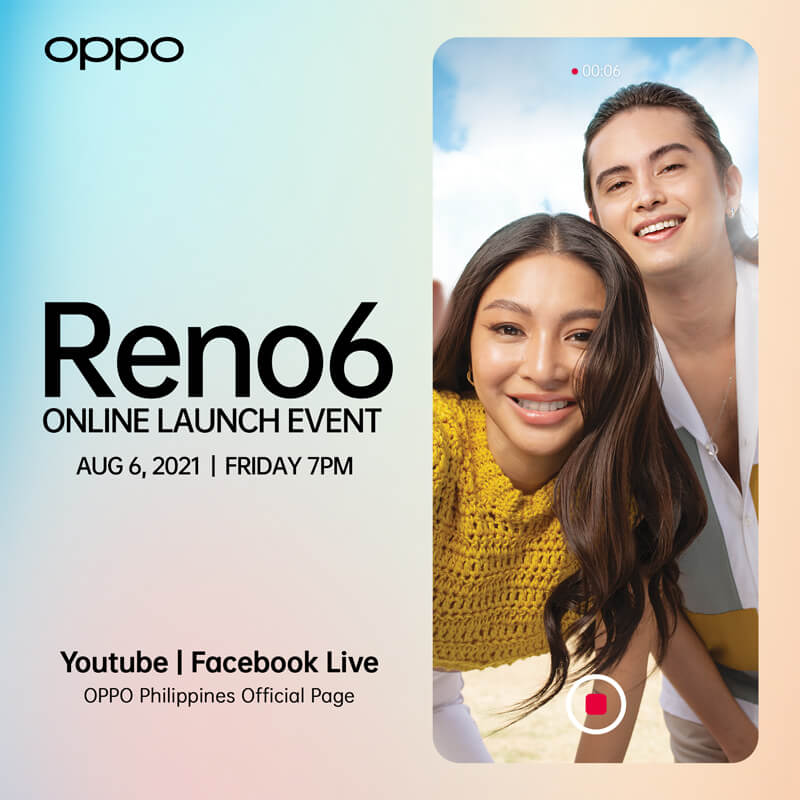 Amp Up Your Emotions with Reno6 Series Launch

Every emotion will be portrait-ready with the much-awaited Reno6 Series launch in the Philippines, special surprises and star-studded performances await fans and viewers.

It will surely be a celebration, as for the first time again in many years, the much-loved celebrities Nadine Lustre,  and James Reid will be leading the Philippine launch of the latest OPPO Reno6 series. There will also be performances from Careless Music Manila artists’ Massiah, Jolianne, and the A-Team during the livestream event to add more excitement as we welcome the official arrival of the Reno6 Z 5G and Reno6 5G in the Philippines.

Special treats don’t end there, OPPO will be giving away special prizes and freebies during the livestream launch. Prizes include Mobile Legends: Bang Bang premium items and currencies, Lyka Gems, OPPO Enco Air, OPPO Enco Buds, OPPO Band, and brand new OPPO Reno6 Z 5G smartphones. So make sure to tune in and participate in the activities while using the official launch hashtags #OPPOReno6 and #EveryEmotionInPortrait. Giveaway mechanics will be announced during the program.

On the design front, OPPO used its proprietary design technology, Reno Glow, to achieve the stunning appearance through layers of film that adds richness and diversity of colorful reflective effects of blue and green tones that change with different angles. Its finish is glossy but with a matte feel allowing for a fingerprint-proof back case. Reno6 series come in two attractive colors: Aurora and Stellar Black.