OPPO officially announced a cooperation with Marvel Studios’ Avengers: Endgame to launch a brand new F11 Pro Marvel’s Avengers Limited Edition smartphone in support of the film. This latest co-branded product brings a brand-new experience to not only OPPO users but also Marvel Studios fans around the world. Officially launched on May 11 in Sri Lanka, this exclusive smartphone will be priced at around Rs.79,990 and will be exclusively available in Thailand, Indonesia, Malaysia, Cambodia, Philippines, Vietnam, Pakistan, Myanmar, Bangladesh, Sri Lanka, Nepal, Egypt, Morocco, Kenya, Nigeria, and India.

As is well-known, there are many young fans who look up to the strong, iconic and powerful Avengers. And OPPO wants to team up with Marvel Studios’ Avengers: Endgame to reach these young fans everywhere! To build an international brand and better communicate with young people worldwide, OPPO has developed partnerships and initiatives related to popular culture and the arts. Through this cooperation with the film, OPPO will connect with fans around the world based on their common love for Marvel’s Avengers.

With the launch of F11 Pro, OPPO has also become more than a Selfie Expert, transforming the smartphone to an All-Purpose Portrait Master with its full upgrade of user experience. The OPPO F11 Pro Marvel’s Avengers Limited Edition is definitely worth looking forward to!

This smartphone takes the theme further with it’s one of a kind design, and it is named Space Blue. With the blue background covered with an intricate hexagonal pattern, the back cover features OPPO signature gradient effects: the color of finish changes dynamically in different light, from steel blue in the middle to midnight blue on both sides, as if in a dynamic, mysterious universe. The bold red Avengers “A” collides with the blue background to form the classic red-blue color-blocking and also echoes the red switch button on the side. This splendid cut logo on the back and the complete logo above cameras also form a complete aesthetic echo, full of advanced sense while highlighting the Avengers logo.

Turn over the smartphone, then you will find the breath-taking panoramic screen. And turn it on and light up the screen, this well-designed wallpaper will attract your attention, as the magnificent Avengers logo shines brightly.

Furthermore, to provide protection, each smartphone is specially equipped with a Captain America-themed Case, which has not only a comfortable hand-held feeling but also extra protection and durability. The central-located finger ring, inspired by Captain America’s iconic shield, is both beautiful and functional, freeing your hands when you're watching a video and preventing a slip or drop when you're holding it. 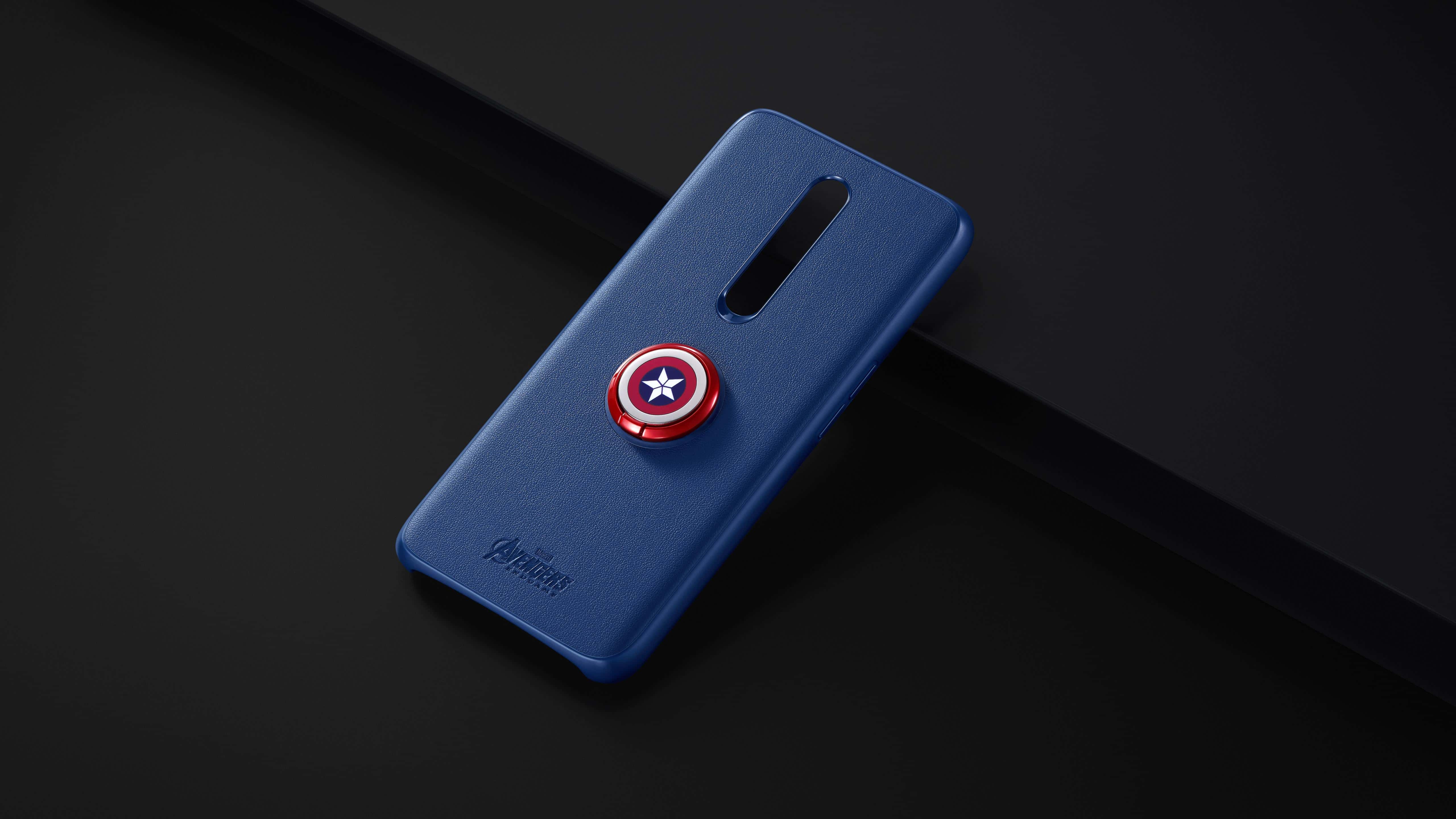 The package for this OPPO F11 Pro Marvel’s Avengers Limited Edition is also meticulously designed and exquisitely crafted in premium black color. The black thermo printed Avengers logo is very striking and creates ensembles with endless heroic power. Moreover, each box comes with a stamped collector’s badge on the Collection Certificate, a wonderful gift for collectors and enthusiasts. 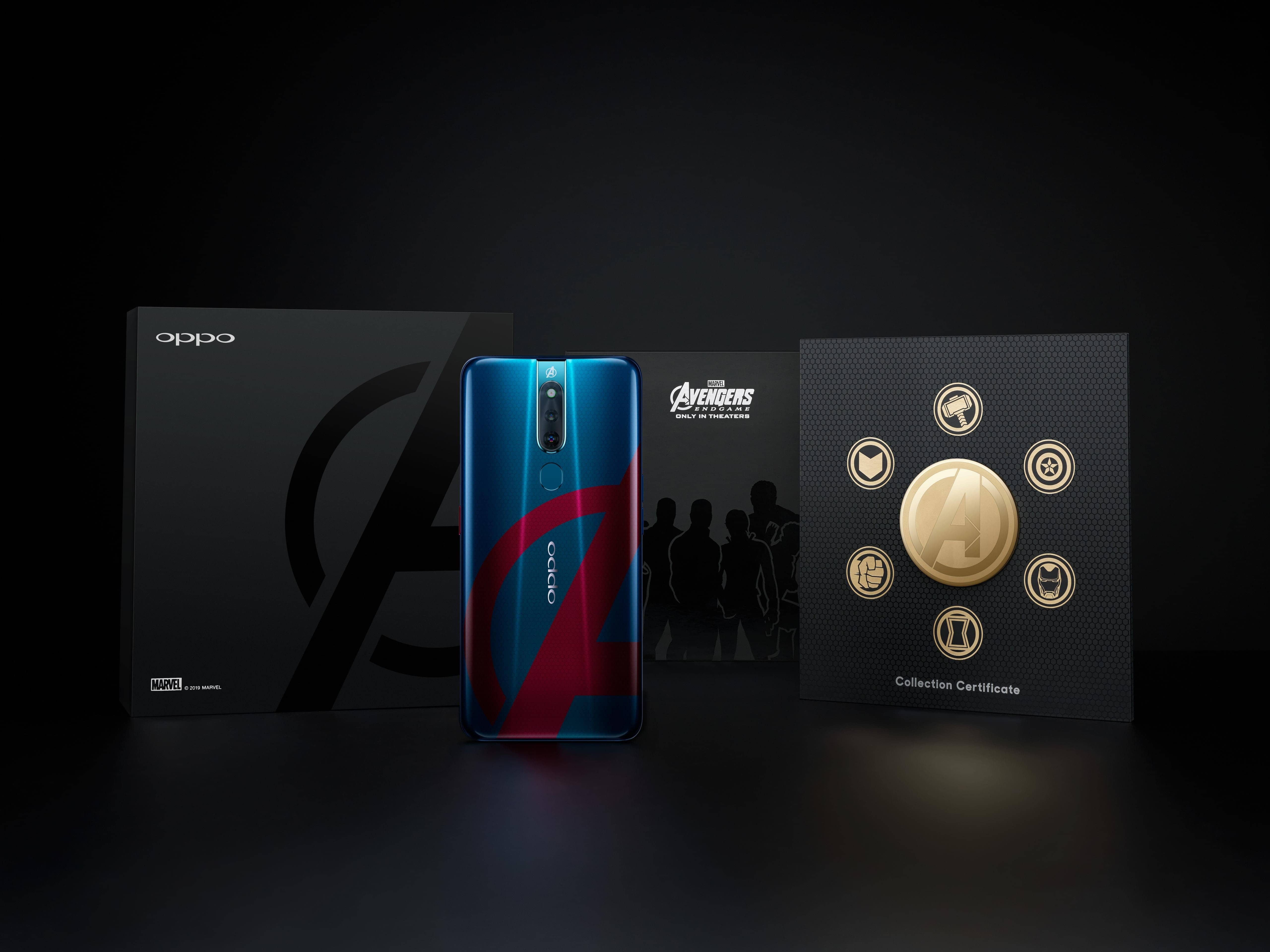 In addition to the customization of the above design, this OPPO F11 Pro Marvel’s Avengers Limited Edition is powerful like a Super Hero. First of all, Captain America’s iconic features are the main inspirations for the design. And as Iron Man can fly in a high-tech armor, this smartphone also has a high-end rising camera. Thor is the God of Thunder, while the VOOC flash charge 3.0 within the phone brings lightning-like charging speed. Hulk has a powerful build, and our smartphone has huge storage, up to 6GB RAM + 128GB ROM. The elite agent Black Widow is very agile and skillful, likewise the smartphone also runs very smoothly owing to Hyper Boost. Finally, Hawkeye is skilled in archery, while the F11 Pro Marvel’s Avengers Limited Edition can also capture every detail by its 48MP dual rear cameras and take crisp clear pictures.

All in all, with the OPPO F11 Pro Marvel’s Avengers Limited Edition, both the appearance and the function, can be considered to be the perfect companion for Marvel Studios’ Avengers: Endgame fans.

We are, too, in awe of the Avengers’ indomitable spirit of heroism. “Assemble the Power”, this exclusive smartphone aims to not only salute Super Heroes, but also acknowledge OPPO global users.