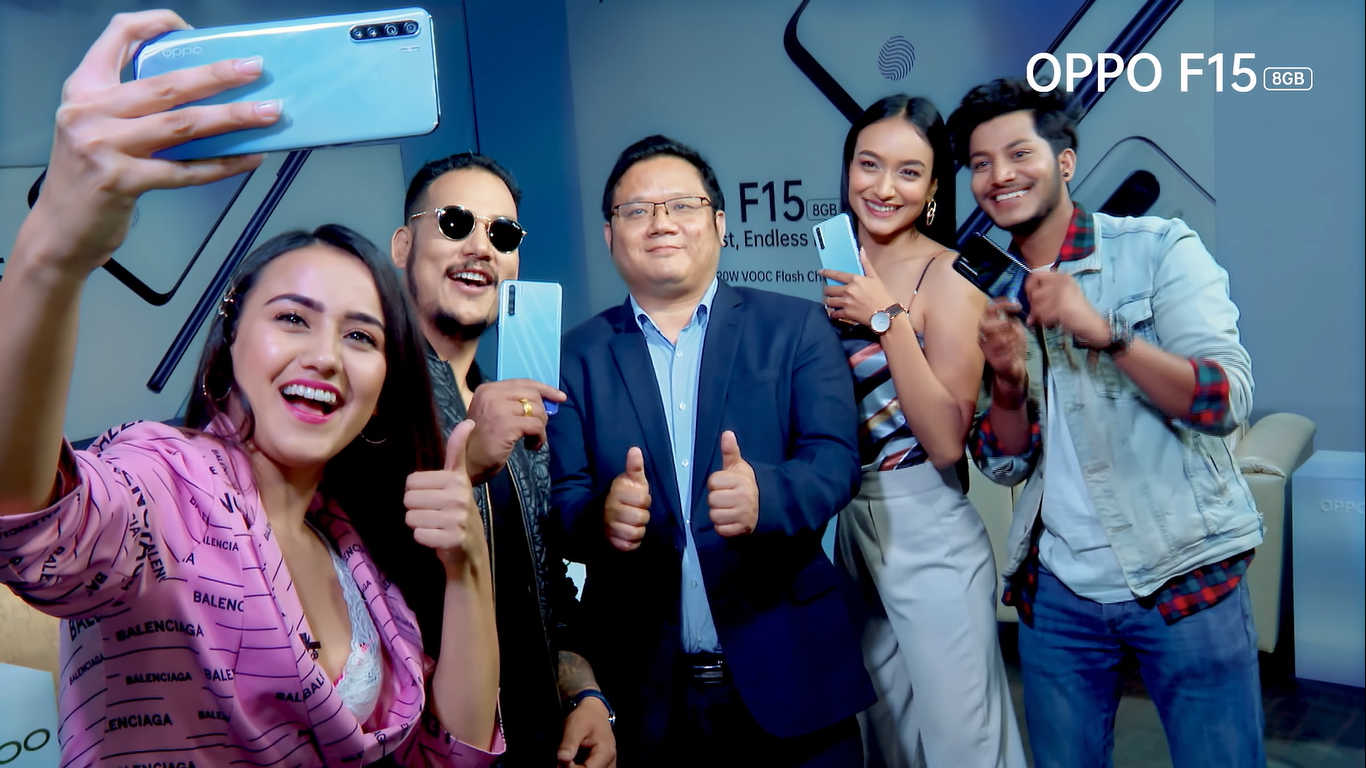 F Series is designed to help the young generation chase for better visual expression and strive for quality, trendiness and a better life, and has won tremendous customers’ love in the past. The launch of OPPO F15 marks a new era of the series – following the series’ continuous technological advancements based on the markets’ needs, embedded with the trendy design.

“OPPO F15 combines many innovative and trendy technologies, to appeal to younger consumers who want the most out of their handset. Our F Series proved to be one of the most popular series amongst younger customers, which is why we decided to bring a new product.  This new product in F Series offers some truly unique tech features to enhance the user experience, which we hope will empower our customers to better explore the world with life captures more professional”, said CEO, OPPO Nepal, Mr. Bobby Zhao, at the launch.

Professional Photography Performance in Your Hands

OPPO is dedicated to upgrading the mobile photography experience. Featuring a sleek package, OPPO F15 features a 48MP Ultra Wide Angle Macro Quadcam, the camera of the highest capacity among products at a similar price, to deliver those ultra-professional shots. Using its four-in-one-pixel combination technology, its 48MP rear camera sensors are designed to capture sharper images with greater detail.

When in Wide Angle mode, you can directly autofocus using Macro as close as 3 cm. This improves the image quality for a variety of applications, i.e. food photos appear more appetizing, text and documents can be captured faster at close range or unleash the inner photographer by exploring the subtleness in nature such as capturing close-ups of dew, flowers or insects.

The new algorithm behind the AI Video Beautification feature, which is applied in both front and back cameras, provides a customized analysis of every face, to apply custom beautification adjustments while optimizing for facial details such as natural skin veins.

Equipped with Electronic Image Stabilization (EIS) with an internal gyroscope, OPPO F15 comes with OPPO’s leading Anti-Shake Video. Shooting videos on OPPO F15 under shaky conditions appear clearer, sharper and more stable. For those who love telling stories through videos, OPPO F15 is here for you.

On top of that, the Night Portrait Mode can help you discover a new world of portrait photography in the dark. Compared to the previous generation, the Night Portrait Mode on OPPO F15 is further enhanced under specific scenarios such as dark streets, restaurants, parks, etc. Also, portraits are clearer than ever even against direct sunlight with Portrait HDR, which automatically takes multiple differently exposed photos, and uses intelligent technology to combine them into one. And with adjustable Portrait Bokeh Effect, you can now also adjust background bokeh effects post picture to your liking.

Ergonomically designed to fit in one hand, the lightness of OPPO F15 is instantly noticeable in hand. At just 7.9mm thin and 172g in weight, the design makes this 20:9 screen ratio handset 5% thinner and 9% lighter than F11, the previous generation in the series.

The slim design means OPPO F15 can easily slide into your pockets without feeling bulky. OPPO F15’s four cameras are featured in a minimalist design on one side and its flashlight is uniquely elongated to match the shape of the camera array. The raised decorative ring also raises the surface of the camera, helping to prevent scratches to the lenses. In short, OPPO F15 is stylish, ultra-portable and perfect on-the-go.

Moreover, the In-Display Fingerprint Unlock 3.0 enables users to unlock the device in 0.32s, which is 45% faster than the previous generation. This new generation of Finger Unlock incorporates improvements at both the hardware and software levels. This not only enables lightning-fast unlocking, but it also increases security through hardware-based anti-forging technology.

Immersive Entertainment and Gaming with powerful software and hardware

Its screen to body ratio of 90.7% means you can fully immerse yourself in ultra-crisp gaming and entertainment experience with OPPO F15’s FHD+ AMOLED Screen’s 2400 x 1080 resolution. Featured with an AMOLED screen, OPPO F15 aims to bring a high definition experience, whether you are watching YouTube, Netflix or Amazon Prime videos in full HD with the Widevine L1 Certificate.

With Frame Boost and Touch Boost, OPPO F15 offers a smooth gaming experience. Frame Boost monitors the phone's operations in real-time to predict and compensate for game lag, one of the biggest frustrations for gamers. Touch Boost gives users a higher level of control while gaming, greatly improving the gaming touch response. Plus, Gaming Voice Changer can change users’ voices into the opposite gender, undoubtedly increasing the fun while gaming. The In-Game Noise Cancelling Effects can reduce noise in gaming sounds which enhances gaming quality by better detecting and hearing voices.

Priced at Rs. 39,990, OPPO F15 will be available in 2 stunning colors, Lightning Black and Unicorn White. It will go on sale from March 23rd.

Reno3 and OPPO Enco Free were launched along 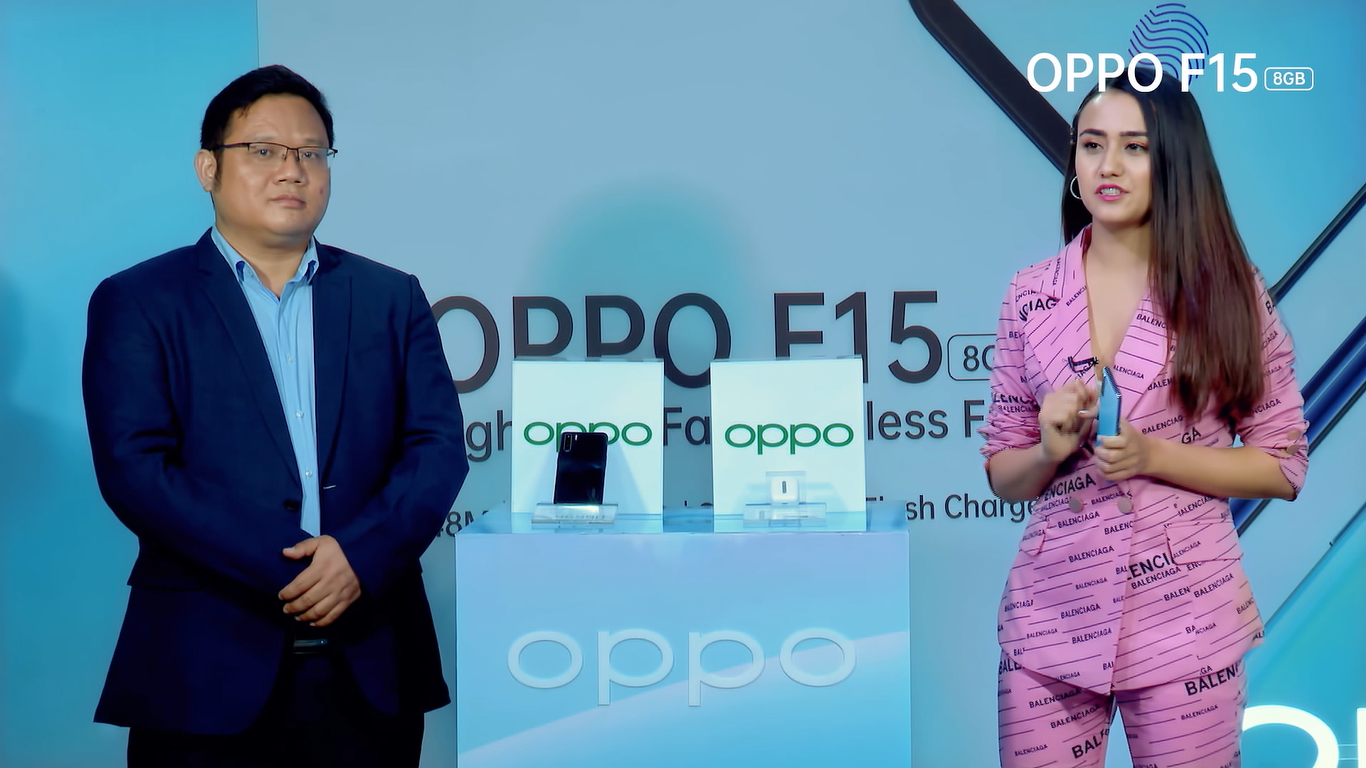