[May 26, Jakarta] Hot on the heels of their debut in Beijing, the OPPO R7 and R7 Plus were officially unveiled in Indonesia. This quick marketing pace illustrates OPPO’s strong confidence in the market performance of its R7 series. These two launches marked the commencement of OPPO’s Experience World Tour for the R7 series. Coming up next, similar activities will take place in a dozen countries and regions worldwide, all held under the banner of OPPO R7 Experience World Tour, where local consumers will be introduced to the “Style in a Flash” product experience of the R7 series. This is the first time that OPPO has introduced its products to international users in the form of a World Tour. The R7 is also OPPO’s first single-product series to offer multiple variants.

“OPPO has always been keen to listen and respond to users’ needs by providing products and services which best meet their needs, as best demonstrated by the R7 series,” said Sky Li, Vice President and Managing Director of OPPO’s International Mobile Business, “We integrate the core features of the R7 into different variants to give all offerings in the series the same soul. Meanwhile, different configurations make it possible to offer diverse variants to different markets. Therefore, we have adopted a ‘Tour’ approach to unify our similar activities around the R7 series. No matter where our users are, they will have the same OPPO experience.” At the same time, OPPO has confirmed that it will add a new variant to the R7 series in the form of the R7 Lite to better meet the needs of users in different regions.

All variants in the R7 series have a full metal unibody and “violin arch” design for outstanding handling comfort. Furthermore they will all include a 2.5D curved screen making sliding of the finger much more natural. Together these features ensure each model boasts a beautiful and artistic form.

The new Flash Shot technology used exclusively for the OPPO R7 features a dual-drive hybrid focus system, comprising of the standard Contrast Detection Autofocus (AF) and the new Phase Detection Auto Focus (PDAF). It’s also combined with an exclusive anti-shake optimization algorithm to deliver an auto focus speed of 0.1s. The series offers 3GB RAM (with select variants), which supports simultaneous running of apps and increases app loading speed by up to 100%. The industry’s fastest charging technology, VOOC flash charging, is available on the R7 series, providing the best interpretation of the “Style in a Flash” idea represented by the R7 series. 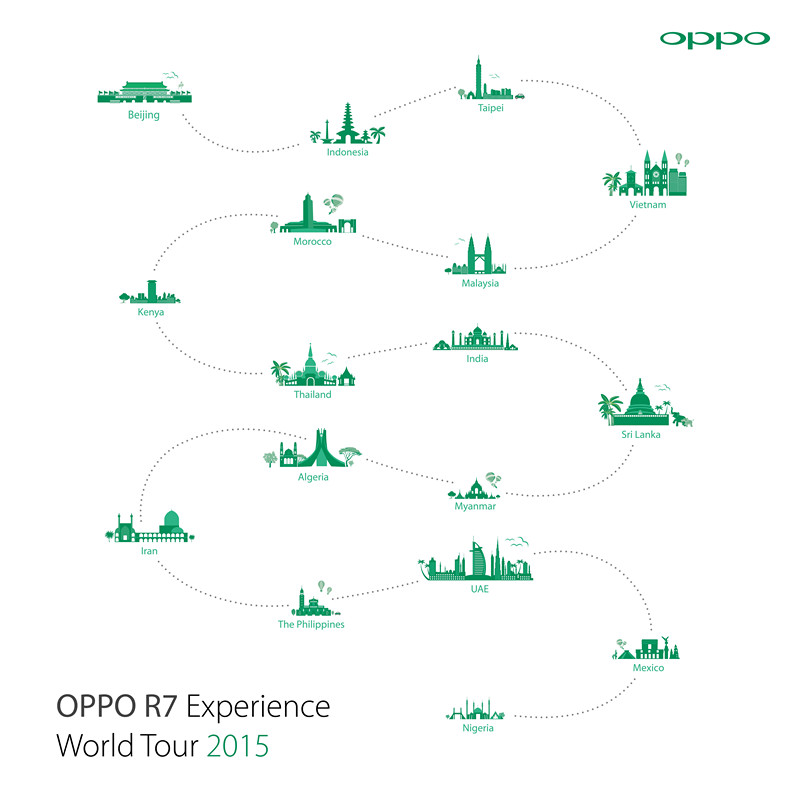 As the OPPO R7 Experience World Tour travels to global markets, the R7 series will be more widely available to consumers worldwide both online and off-line. With elegant design, sophisticated manufacturing, superior specifications, and diversified variations, the R7 series is set to stand out in the crowded smartphone market.