OPPO, the evolving smartphone brand in India with exceptional stylish products has rung in the year 2016 by announcing Bollywood heartthrobs Hrithik Roshan and Sonam Kapoor as its South Asia Region brand ambassadors. The popular film-stars have been a part of the brand’s India journey towards positioning itself as a leading mobile brand providing a unique mix of technology, design and style to consumers since 2014.

Announcing the development Mr. Sky Li, Vice President OPPO and MD of International Mobile Businesssaid, “As OPPO celebrates its 2nd year anniversary in India it gives me immense pleasure to announce Hrithik and Sonam as OPPO brand ambassadors. Both Hrithik and Sonam are youth icons and are looked up to for their style and attitude, which is completely in tune with our brand philosophy, which is about young at heart and pursuing for perfection, and always be a trendsetter.

He further added” We encourage consumers to be experts in photography and be trend setters like our brand ambassadors who have influenced us with their astounding pictures”. 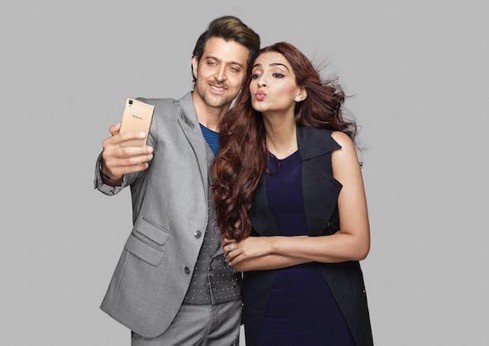 Commenting on his coming on board as brand ambassador for OPPO in India, Hrithik Roshan said, “ I have always loved the stylish and technologically superior OPPO phones and have many cherished memories clicked with my first OPPO N1 smartphone with rotating camera. I am proud of the brand’s growth in India and am very excited to be a part of yet another successful innings of the brand in India in 2016.”

According to Sonam Kapoor, “My association with OPPO echoes my belief in the brand’s philosophy of marrying technology with style and elegance as a phone is increasingly becoming a lifestyle statement especially amongst the youth. I am pleased to be associated with OPPO which caters to the consumers with exceptional products.”

OPPO is the Official Global Partner worldwide for the mobile phone category with International Cricket Council (ICC)for 4 years, from the start of 2016 to the end of 2019. In May 2015, OPPO also announced a 3-year partnership with FC Barcelona as global partner.OPPO has also joined forces with America’s Next Top Model (ANTM) Cycle 22 in 2015, to bring a range of stylish devices to the popular reality TV show.

To date, OPPO sells its phones offline in over 20 markets around the world, and offers online sales to other fifty-plus countries.OPPO recently launched OPPO R7 Plus and R7 Lite in the Indian market, which have been getting phenomenal reviews from various technology experts. OPPO currently has 20 phones including flagship models such as the R7 Plus, R7 Lite, N3,R5 and Find 7.